Bad people are much worse in bad vehicles

Who would have thought that one direct effect of the introduction of music downloading would make us more vulnerable to terrorist attack?

For a band to make money in 2016 they need to perform live to as many people as possible because the downloading of music is not as lucrative as selling CDs.  Large open air concerts especially in any public places make target rich environments for terrorist organisations.  These organisations like Daesh/ISIS started as armies, became guerrilla organisations as they became increasingly targeted, then became franchises spread around the world and are now brands for any misguided and unstable individuals to seek fame.  Public carnage is their aim and we must deny them routes to success.  If we look at the recent Nice attack, we can see what one man in a truck can achieve.  We can all imagine a similar scenario in any of our major cities or at any of our large open air concerts.  One man with a suicide vest is bad but one man in a truck laden with explosives travelling at 80kph can achieve so much more. 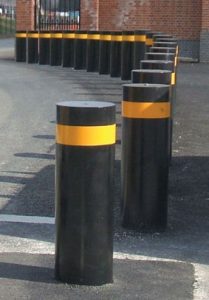 Our first method of combating this tactic is to deny the criminal the use of a truck by securing them properly and installing tracking devices to locate those being used illegally.  The second mitigating factor should be to install crash tested rising bollards in the access routes to areas which are used for public gatherings.  During normal working times the bollards are down, during times of public events the bollards are raised turning the areas into pedestrian only areas.  The cost of this could easily be justified by the reduced need for security staff.  In London we have established a ring of steel and we should now establish another flexible pedestrianizing solution for those areas regularly used in for permanent or temporary public events.   We could then focus on the suicide bomber.  However, we must also remember that when these bombs explode, businesses are destroyed and so there should be concern and funding from local businesses who may never recover (financially) from such an attack.  Furthermore, closing these areas to traffic at weekends would further secure those businesses and would encourage more pedestrians into areas where a café culture could flourish.

Shopping malls are already pedestrianised but deliveries come by trucks and the unloading areas are often located below the pedestrian areas and must be protected by road blockers to allow vehicles to undergo proper security screening before they enter vulnerable areas.  Parked cars can be kept at suitable distances by using crash tested static bollards.  The same applies to stadia and we must remember that each of these shopping malls and stadia are businesses which need to trade to make money and so business continuity and pedestrian safety are both security concerns.

If we are to continue to support democracy and value our freedom to enjoy living in a multicultural environment, full of eclectic outdoor activities, we must learn how to exclude those who would do us harm and the tools by which they perpetrate their crimes.  Guns, knives and (even worse) suicide bombers all are a risk and can be screened at entry points to buildings and internal gatherings of people; however, VBIEDs are often so large and aggressive that we must stop them having any access to large public gatherings.  Equally, we must also allow bona fide delivery vehicles full access at appropriate times to their places of delivery.  The answer to this conundrum has to be competent security planning and the installation of crash tested hostile vehicle protection equipment which can be brought into action whenever large scale regular leisure activities are being enjoyed.