The Avon RB700 Road Blocker comes in a variety of widths to suit specific site requirements, with a blocking segment height of 700mm; it provides an effective method of securely controlling vehicle access to a restricted area.

It is an ideal solution for sites that require a higher level of security; the distinctive markings of the road blocker provide a visual deterrent to unauthorised vehicles. 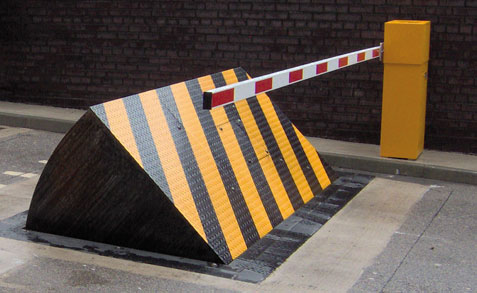 The road blocker is ideal as a robust alternative to a fully impact tested road blocker it is available in widths up to 6m (increments of 500mm) and provides physical vehicle control and security for an establishment.

The blocker is operated by a hydraulic ram with the power unit (HPU) positioned locally within an externally rated cabinet. The blocker mechanism is encased in a sheet steel enclosure and has access points for onward connection to ducting for hydraulic hoses and control cables.

The blocker comes with a push-button control hold as standard, however it can be customised to interface with a wide range of access control equipment to suit specific customer requirements.

For safety reasons pedestrians, cyclists and motorcycles are advised not to use a blocker controlled roadway, additional safety measures can be incorporated into the blocker system if required. Where the road blocker control point is remote from the installation, we strongly recommend the fitting of a recordable CCTV system, traffic lights and safety inductive loop systems.

This is a specialist security product and is designed for use with vehicles only and a full site risk assessment must be carried out at design stage to ensure that all relevant safety systems are included.

View our other vehicle control solutions

Our range of sliding gates provide security for authorised only areas

With tens of thousands of security projects delivered and installed globally, we strive to work closely with our customers from initial concept and specification, through to delivery and life support of our systems.

If you would like to discuss a specific project or would simply like some further advice about our road blockers from one of our experts...

In 2007, a vehicle laden with explosives was driven at speed into the façade of the departure terminal at Glasgow Airport, with the intention to cause mass casualties; luckily the…

Bad people are much worse in bad vehicles

Who would have thought that one direct effect of the introduction of music downloading would make us more vulnerable to terrorist attack?